While I was working out today I watched “Land Of The Dead“, George Romero’s 2005 4th zombie flick, starring Aussie actor Simon Baker, Dennis Hopper, Asia Argento and John Leguizamo. What a great way to pass a couple of hours of otherwise-boring exercise.

Two things I loved in particular with the “Making Of” doco.

1. Romero talking about how Hopper decided he wanted to play the part of the bad guy, Kaufman, as Donald Rumsfeld and the way Romero yells “Exactly! This is about the Bush administration!” Too many directors are oh-so-politically correct (even now!), but not George, oh no. He tells it like it is!

2. The other thing I loved was George’s glasses:

When I saw the Ocean’s 13 trailer, with Elliott Gould wearing the same glasses, George Burns glasses, I said “I’ve got to have some!” 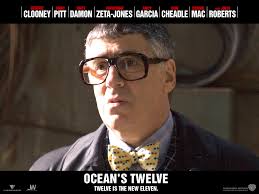 Anyone know where I can get some? Without real lenses of course. I have 20/20 vision (not like the rest of you geeks out there… how come I’ve read more books than the rest of you put together, I sit in front of a PC all day, and I *still* have 20/20?).

Kevin Rudd is pitching himself at the ALP conference as “Mr 21st Century”. Yet, at the same time, he is content to wear his Anglican Christianity on his sleeve. I find it impossible to take anyone seriously who tries to position themselves as 21st century yet clings openly to a 2000 year-old mythology about a miracle worker who could fly.

That said, I admire his cojones in commissioning an Australian version of the Stern report. Do we really *need* another Stern report though? Isn’t one Stern enough Stern? Let’s face it – we call know not doing anything about climate change will be BAD. REALLY BAD. And those that continue to dispute that issue, aren’t going to be convinced by one more report, any more that Rudd will drop his Christianity by one more book pointing out that there is no evidence to support his mystery faith. It’s a waste of money.

I see Dom Carosa’s been busy launching yet ANOTHER new site – NICE SHORTS. I stumbled on this (yes, using Stumble Upon) last night and watched a great clip by up-and-coming Aussie filmmaker Gabriel Dowrick.
His short film, “The Lord Is My Shotgun” is very impressive. I’ve got Gabe coming on G’Day World later in the week for a chat. I think he’s about 21 and has made something like 20 short films as well as a recent straight-to-dvd zombie slasher horror feature called “Nailed”.

Did TWO – count ’em – TWO workouts today. 45 minutes on the xtrainer at 9am and then another 30 minutes at 5pm. Don’t want to be a fatblogger. I cannot for the life of me get interested in working out at 6am, so I tend to wake up, do email for a few hours, take the kids to school, and THEN get on the machine. And watch zombie flicks. I can pretend I’m running away from the flesh-eating zombies. SPEAKING of which… am I the only person who is surprised that with those rotten teeth they all seem to have, the zombies still manage to rip huge chunks of flesh, tendon and bone out of their victims? Shouldn’t their teeth just fall out when they try? Now there’s an idea for a postmodern zombie flick – the zombie’s attack, their teeth fall out, and everyone falls over laughing while the zombies spend the rest of the film trying to gum people to death….

No guest today, just a bit of a chat about:

Don’t forget to make use of my new comments line – Aussies can dial into +613 9016 9699. The rest of you can either pay international charges (cmon, what price can you put on being on my show??) or just start begging me to set up an international number.

If you enjoyed this podcast, make sure you don’t miss future episodes by subscribing to our feed and leave us a voice comment!

John Howard *still* doesn’t want to do anything about climate change. The Cartoon Network pays $2 million in fines in the cheapest ad buy this year. And I review some of the recent comments on the blog. All that and not much more on tonight’s show.

If you enjoyed this podcast, make sure you don’t miss future episodes by subscribing to our feed.

The word of the day is “Enterdrainment“: Any passive form of entertainment that is so incredibly mind numbing that it sucks the intelligence from the listener or viewer; ultimately over time reducing (or limiting) them to a simplistic proto-human mental state, incapable of cognition or rational thought.

Some links from the show:

Get the United Nation’s version of “the facts” about climate change at:
United Nations Framework Convention for Climate Change

If you enjoyed this podcast, make sure you don’t miss future episodes by subscribing to our feed.